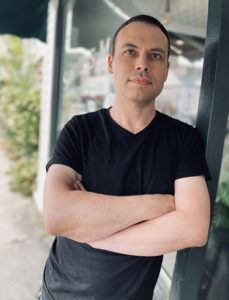 Artist Joshua Meyer is known for his thickly layered paintings of people, and for a searching, open-ended process. “These aren’t so much portraits as they are depictions of intimacy,” suggests the Boston Globe. Meyer has been recognized with a Pollock-Krasner Foundation Grant, a CJP Arts and Culture Impact Award, The Sustainable Arts Foundation Award, as well as the Massachusetts Cultural Council’s Painting Fellowship. The Cambridge, Massachusetts artist studied art at Yale University and The Bezalel Academy, and has exhibited in galleries and museums internationally, including Eight Approaches at Boston’s Museum of Fine Arts, Tohu vaVohu at Hebrew College, and Becoming at the Yale Slifka Center and NYU Bronfman Center and the retrospective Seek My Face at UCLA’s Dortort Center. Meyer is represented by Rice Polak Gallery in Provincetown, and Dolby Chadwick Gallery in San Francisco.

Born in Lubbock, TX
Lives and works in Cambridge, MA

Visual-Arts Representative / Speaker for Yale in the Arts, 1995.

JewishBoston, The Festival of Lights Returns to the MFA, Judy Bolton-Fasman, December 2022.

JewishBoston, My Guston, Joshua Meyer, May 2022.

Mosesian Center for the Arts, Portrait of the Artist: Perceptions of Joshua Meyer, Aneleise Ruggles, March 2019.

From the Artist’s Perspective, interview with Ray Wiggs [30 minutes], WOMR Radio, May 2018.

Culturepeel, Art in the age of Trump: reflections on the “Really” collaboration, Anastasya Partan, February 25, 2017.

Fine Arts Connoisseur, In With the New and Out With the Old?, Jeffrey Carlson, December 13, 2013.

The Boston Globe, Paintings, drawings, and the in between, Cate McQuaid, July 13, 2011.

The Forward, ‘Paintings That Hang in the Balance,’ Renee Ghert-Zand, The Arty Semite, January 12, 2011.

Artsake, Little bits of all of them…shimmering, November 2010

Juxtapositions: Joshua Meyer on Chaos, Painting and the Many Shades of Gray, film by Evelyn Herwitz. 4:01 minutes, 2010.

Atlanta Jewish Times, Wandering Through His Own Mind, Suzi Brozman, May 18, 2007.

The Philadelphia Metro, The Knives Have It, Dorothy Robinson, May 2, 2007.

The Jewish Advocate, Giving a form to our world, Penny Schwartz, July 9, 2004

The “Commanding Vision” of Joshua Meyer, syndicated in: